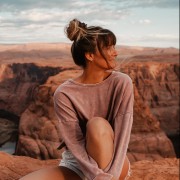 Hiking Castleton Tower Trail in Moab is nothing short of iconic. It is one of, if not the most famous desert tower in the world. When I first laid eyes on Castleton Tower from the window of our rental Jeep I turned to Cole and immediately said, “How do we hike to that?”

Hiking Castleton Tower Trail is hot, steep, and scrambly. It is hands down the hike I recommend others do while visiting Moab.

With Moab being a launch point for both Arches National Park and Canyonlands National Park it’s tempting to overlook things to do in Moab itself, but trust me you won’t want to miss this hike.

In this guide, I will highlight what to expect when hiking Castleton Tower Trail, where to camp, what to pack, and general tips for safely and responsibly hiking in the desert.

Let’s just say, hiking in the desert is a beast of its own and warrants a dedicated section.

Cole and I had a rude awakening our first couple of trails transitioning from Hawai’i to the unforgiving conditions of desert trekking. Although the hiking distance for Castleton Tower Trail seems short, make sure to plan ahead so you can safely reach the tower, and enjoy doing so.

Cole and I visited Moab in July. To put it mildly, it was excruciatingly hot. As someone who never excessively drinks water, I could not believe the amount of water my body was requiring. Even when completing such a short trail.

It’s no secret that hikers should be drinking a lot of water when hiking in the desert, or anywhere for that matter. But, still, many people underestimate the amount of water their body needs in dry, high altitude, and high temperature areas.

Castleton Tower Trail is no exception.

Most of the trailhead signs in the area advise hikers to carry about one liter for every two miles. For example, to safely hike Castleton Tower Trail, hikers should plan to bring along roughly two liters of water.

In short, know your body, know your limits, and when in doubt always carry more than enough water. Even though, I know, it’s heavy.

There are several benefits to starting this hike early. The most obvious reason being, it’s less hot. The desert heats up the moment the sun hits the ground so the more trail you can cover before then, the better.

Having the chance to witness the desert at its most beautiful time of day was my number one reason for waking up every single morning before the sun on our three week Utah road trip. We unfortunately hiked Castleton Tower Trail mid-morning so most of our hike was blinding bright, and hot.

If I had the chance to go back and do it again, I would have gladly raced the sun to the top of the tower. There’s just something unspeakable about the way the desert glows red at sunrise. It feels sacred to be able to witness the land come to life.

Moral of the story, get up.

I can’t imagine a worse scenario than getting lost in the desert. Yikes!

While the majority of Castleton Tower Trail is pretty straight forward, we definitely had to retrace our steps and reference the AllTrails app more than once. Once you start actually ascending the slope to the tower, the trail becomes littered with fallen rock.

It’s actually pretty eerie to see the size of the boulders that have tumbled down into the path you’re now climbing. As the mounds of rock and wash become more prevalent the path gets harder to follow.

Cole and I both found ourselves in some perilous situations on this trail. The moment you feel as though you’re not on a trail you’re probably not.

Use caution and check the map frequently.

It wasn’t until we were on our Paddle Moab tour that we found out Castleton Tower is a famous rock climbing destination. As climbers ourselves, you can imagine our dismay!

When our tour guide first told us that people climb Castleton Tower I was admittedly taken aback. The tower goes straight up, is massive, and balances precariously atop a ridge line. I felt uneasy just standing at its base, looking up.

While the tower upon first glance seems impossible to climb, the route ratings suggest otherwise. Castleton Tower has a mix of routes ranging between 5.9 and 5.12.

Climbing Castleton Tower would take endurance, some crack climbing experience, and a great amount of confidence. There are several guided climbing tours available in Moab for those up to the challenge.

Now knowing that people climb the tower has me itching to go back and climb it myself. Castleton Tower, I’m coming for ya.

We knew little of what to expect before we began our hike to Castleton Tower. The distance seemed easy enough and we’d become accustomed to always being hot at this point in our road trip.

The hike starts off pretty mellow as you approach the trail that will ultimately lead you straight up to Castleton Tower. You hike through a fun canyon area that takes some maneuvering before crossing a dirt road.

Once you hit the road you start what I consider the actual trail – or at least the part of the trail that warrants the “difficult” rating.

Keep in mind, Castleton Tower Trail is more of a climbing access trail than a maintained hiking trail. Meaning, hikers have created a walking path to the tower for climbing purposes. With that being said, it’s not the most maintained or straight forward track.

Again, an AllTrails offline map would aid tremendously and help you avoid some sketchy situations. As you begin to climb the slope towards Castleton Tower the elevation begins to increase exponentially. At times you are no longer walking but more so pulling yourself up and over rocks.

We paid close attention to our footing as much of the path is narrow and full of sand and loose gravel. Especially as you near the top of the trail, things start to get a little patchy.

At least when we visited, several areas of the trail had been washed out from fallen rock. Navigate around these areas cautiously and get back onto the trail as soon as possible.

Remember to take breaks when you need them. The path is very steep and completely exposed. Make sure you’re staying hydrated and don’t forget to look up from time to time.

The great thing about there being zero canopy on the trail is the unobstructed 360° views. The views of Castle Valley are absolutely breathtaking and seemingly endless. Even though it will feel as though the views can’t get any better, nothing compares to the feeling of standing at the base of Castleton Tower.

It takes some unprecedented scurrying to actually get to the top of the ridge but it’s worth it. The tower is colossal in every sense of the word.

The best part? Your chances of soaking in the summit all by yourself are high. We stood looking up at the tower alone, completely in awe.

Again, don’t let the 2.6 mile distance fool you. Pack along at least two liters of water and make sure to keep yourself hydrated on the hike.

I always opt to hike with a bladder rather than a bottle so I don’t have to stop every time I want to grab a drink.

Hiking Castleton Tower Trail requires a reliable set of shoes with good tread. Much of the trail consists of loose sand or crumbly gravel. This is not a trail to attempt in your tennis shoes.

Being able to trust your footing is very important on this hike as more than once you’re required to side-hill scramble. I’ve read several AllTrails reviews of hikers having to turn back because they didn’t feel secure in their footing near the top.

I wore my trusty Saucony Peregrines and they did great.

As with any hike, you’ll want to bring a small, comfortable day pack to house all of your essentials. I never set out for any length of hike without my go-to day pack.

It’s no secret the sun in Utah hits different. Grab your sunscreen, hat, and/or sunglasses. It’s going to be a hot climb. The entire hike, start to finish, is exposed. You’ve been warned!

Now, you’re probably thinking this hike it way too short to need a snack.

Honestly, the snack is more so a way of killing time at the top so you can soak in the amazing views. Plus, it’s always a good practice to carry a snack in the event that you, or your hiking buddy, needs a little pick-me-up.

For one, camping is only allowed in designated campgrounds in Moab and within 20 miles of city limits. As an adventure traveller who is trying to start all of her hikes before the sun is up, sleeping 20 miles outside of the town I’m trying to adventure in isn’t ideal.

So, we broke our own rule and slept in some designated sites during our time in Moab.

It couldn’t get any more convenient than pitching a tent steps away from the trailhead. There are lots of walk-in tent sites at Castleton Tower Preserve.

There’s a small parking lot, the same lot for hikers, where campers can park their cars and walk to campsites. While the campsites are free (donations accepted and encouraged), all overnighters should still register here.

This camping area has pit toilet facilities but no running water.

located off of Highway 279, Jaycee Park is a BLM camping area that is close to some of Moab’s best attractions: Corona Arch and Wall Street climbing area. The camp sites are just across the road from the river and offer some beautiful views of the surrounding rock walls.

These campsites feel a little more private than others in the area and provide some canopy. Again, there are pit toilets but no running water.

Kings Bottom is another BLM camping area along Kane Creek Road. This camping area is also close to the town of Moab and situated on the river.

The views from these campsites are beautiful but less private and completely exposed to the sun. As with the other camping options, campers have access to pit toilets but not water.

We found Willow Springs after we had already camped in Moab for a few nights, and we were so glad we did! Willow Springs is a free dispersed camping area near Arches National Park.

This free camping area is very popular. Luckily, the area is so vast it’s easy to find a spot to yourself. Shaded spots are hard to come by but the surrounding views and free price tag are worth it.

We stayed at Willow Springs while we were exploring Arches National Park. There’s even a backroad that connects you to the park but unless your car has high clearance, 4WD, and you’re comfortable navigating some pretty gnarly terrain, I don’t advise it.

There are no amenities here since it’s a dispersed camping area so make sure to come prepared.

Have you been to Moab or planning a trip? Drop any questions you have about hiking Castleton Tower Trail or camping in Moab below.

Where We Went Next 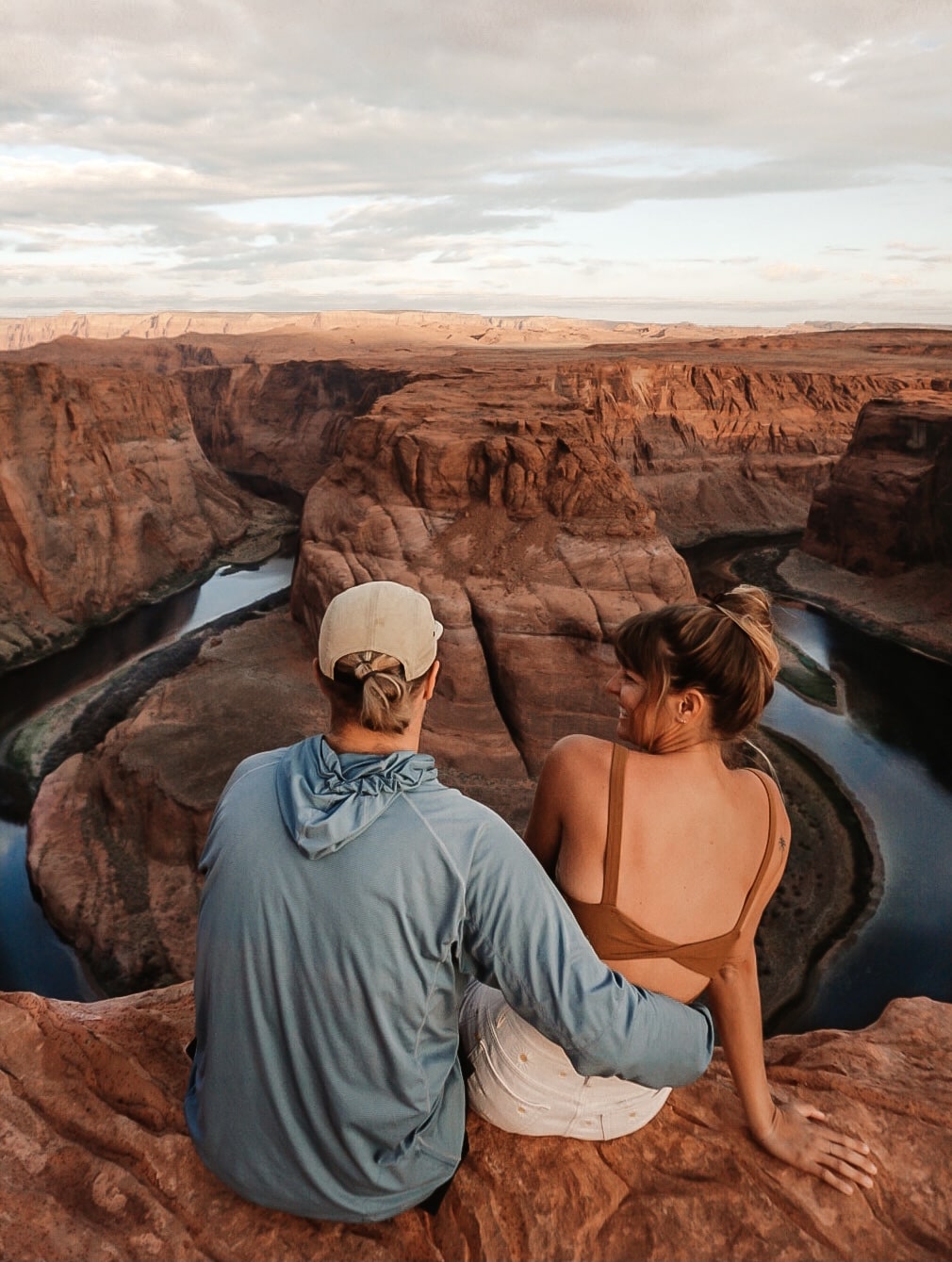 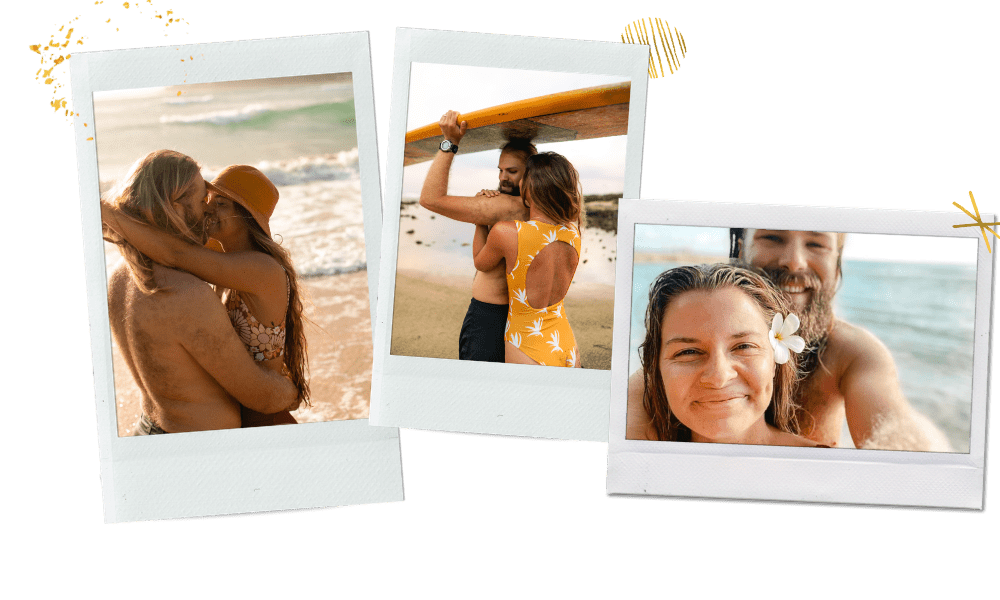